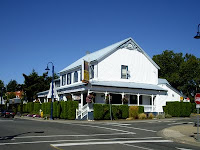 It was sad to learn on a recent trip up Island to Comox to find that the old Lorne Hotel had burnt to the ground. Long a fixture located on Comox Avenue right at Port Augusta Street, the Lorne Hotel will be a sad loss for Comox and for those people who made a ritual on commuting here to view some of British Columbia's proud past.

The Lorne which was built in 1878, was considered the oldest hotel in British Columbia, named after the Marquis of Lorne, who at the time was Canada's Governor General.

The historic building had a covered balcony with it's unique pub served generations of people growing up and living in the Comox Valley. Every kid who grew up here remembers the building with such found memories it will really be missed.

For more information on the Lorne: