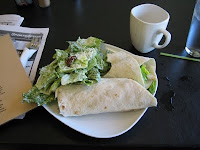 As we travel around British Columbia we often have a chance to try new restaurants and cafes in different towns throughout the province. Often when we order rather than having a green salad or fries with our meals we like try a Caesar salad instead.

The quest often becomes who in BC makes a good Caesar Salad. We are not talking about the high-end establishments of Vancouver rather the small independent operations that offer good value for the money.

The latest edition of a very good salad happens to come from a small cafe in the very small community of Salmo. The cafe is called the Dragon Fly and was recommended to us very highly by the park attendant from Champion Lakes Provincial Park.

Once we arrived at the Dragon Fly we could tell by the packed house that the food was going to be good. We were not disappointed, the chicken wrap and accompanying Caesar salad was excellent. This was a definite surprise and one that will have to be experienced again.

If you happen to be going through Salmo make a point of stopping at this quaint little cafe which is housed in the 1934 built Jas. R. Hunnex building. Not only does the Dragon Fly Cafe serve one of the best Caesar salads in British Columbia but also has free wireless internet and serves up Kicking Horse Coffee.
Posted by OurBC at 7:44 PM No comments:

Labels: Best Caesar Salad in BC, Dragon Fly in Salmo 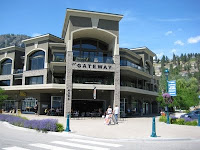 Going through and editing my photos of a recent trip today I am reminded of a number of good times and certain highlights that were experienced. One category that keeps coming up is a number of coffee shops that were visited. Some of these businesses stand out and are often included as a favourite when visiting that community.

One of these businesses has to be the Bliss Bakery in Peachland. Located along the waterfront at 4200 Beach Avenue in the Gateway complex, Bliss Bakery offers a wide array of breads, pastries and coffee.

The facility is clean, open and if you prefer the outside has a good selection of tables with umbrellas offering panoramic views of Okanagan Lake. If you enjoy art Bliss Bakery sometimes features local photographers displaying pictures and artwork of the Okanagan.

Bliss Bakery web site: http://www.blissbakery.ca/
Posted by OurBC at 9:18 AM No comments: 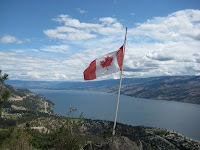 We went for a hike up Pincushion Mountain in Peachland. The hike is moderate to hard and takes about one hour to complete. The easterly view from the top of Okanagan Lake is incredible. It takes in Okanagan Mountain Provincial Park plus all the way to Penticton in the south to Kelowna in the north.

If you would like to take the hike turn on Ponderosa Drive off of Hwy 97 in Peachland. Take the road all the way up and go past the entrance to the golf course and continue right up to the last condominium and look for a gate near a fire road. Park your vehicle here.

Afterwords we went for a great coffee and baked goods at Bliss Bakery which is located along the waterfront in Peachland. 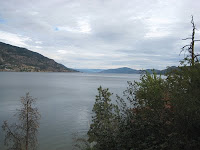 There was no sizable amount of rain in Kelowna last night. This morning at least the temperatures at this time are starting to cool off at least and the skies to the north towards Fintry and Terrace Mountain seem to be clear.

The plan today is to take off soon and travel down to Peachland and hike up Pincushion Mountain. The skies might be clear in the south towards Penticton as the fire at Mount McLean near Lillooet apparently is 20% contained.

After the hike the plan is to go into Peachland and visit Bliss Bakery and Coffee Shop. They serve excellent bakery and coffee products and have tables outside that feature excellent views of the Peachland waterfront along Okanagan Lake.
Posted by OurBC at 10:41 AM 1 comment: 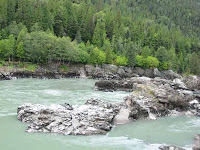 We had a chance to go to Kitselas Canyon today. The canyon, a National Historic Site of Canada, is considered sacred to Gitselasu people. Gitselasu which means "people of the canyon" have been living off the land here for thousands of years.

The canyon is located just east of Terrace near the small hamlet of Usk. To get here travel on Hwy 16 either west of Terrace or east of Kitwanga Gitwangak).

Kitselas Canyon also used to be the site of where they would take the sternwheelers through the dangerous waters of the Skeena River on the way to Hazelton. The captains of these vessels took extreme measures when travelling through perhaps the most difficult navigational river in North America.

Kleanza Creek Provincial Park is situated across Hwy 16 from the entrance to the historical site. You can find a small vehicle-accessible campground here. The park features riverfront campsites,a small canyon,river pools and river walkway.
Posted by OurBC at 4:07 PM No comments:

Fishing off Ferry Island Bar in Terrace, BC 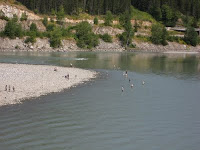 The fishing on the Skeena River off the gravel bar at Ferry Island has been spectacular in the last few weeks. Today a number of people have been limiting out for sockeye and pink salmon.

Most of the fishers have been fly-fishing with a few using a cast method using a variety of techniques from floats to drag lining. All methods seem equally successful.

Travel on Hwy 16 and look for the Ferry Island Campground. When you turn into the campground take a hard left before the gate and park in the large parking lot situated below the Skeena River Bridge.

From here there is a short walk to the fishing site.