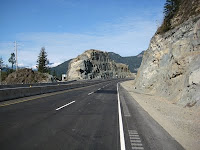 Just got back from a trip along Hwy 99, "The Sea to Sky Highway" on the section from Horseshoe Bay to Mount Currie.

Hwy 99 has gone through a major upgrade for the 2010 Winter Olympics in Whistler and is about 99% complete. The only exception was some paving that was being done just north of Squamish by Brohm Lake. This section is expected to be completed soon and only caused a slight wait when travelling on the "Sea to Sky."

What a joy to travel Hwy 99 compared with what the road used to like when it was nicknamed the "Squamish 500." The big changes are the bypass going around Horseshoe Bay, the increase of lanes especially through Lions Bay and Brunswick Beach and the straightening of corners and hairpin turns by blasting through rock and adding wider bridges.

Also while travelling by Britannia Beach north to Squamish the big change on Hwy 99 was no Woodfibre Pulp Mill plume coming from the stacks ruining air quality of Howe Sound. This section of highway goes past the Stawamus Chief one of the largest granite monoliths in the world and offers northerly views of Squamish with Mount Garibaldi in the horizon.

After Squamish going north Hwy 99 goes past the Tantalus Range, along the Cheakamus River,then past Daisy Lake and Brandywine Falls with views of Black Tusk in the east. The route was safe with plenty of passing lanes and areas to pull off to enjoy the spectacular views.

The highway upgrade done by Peter Kiewit Sons has created a faster and safer route to enjoy one of the most scenic geography and outdoor recreation in all of North America. In all Hwy 99 upgrade was a very pleasant surprise which thanks to the 2010 Olympics will last long after the games have been completed.
Posted by OurBC at 4:31 PM