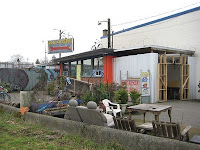 Today was the day to get rid of a couple of bicycles that were collecting dust in the garage for probably the last 15 years. One bike a Raleigh Criterium road bike bought in the early 1980’s, the other a bike was a Nishiki Bushwacker Mountain Bike from the early 1990’s, one of the first mountain bikes to come out, 18 speed, chro-moly, all rigid suspension.

Both bikes were bought through the years at the original Caps Bicycle Shop at 434 East Columbia Street in New Westminster. The bikes had new tires put on recently but had got in the way, been move about 10 times or so and not seen any use for a long time. The Nishiki was looking a little tired having survived many sections of the KVR (Trans-Canada Trail).

The bikes were well past their prime but still had lots of life left in them for someone who did not mind older technology and wanted away to get around without the high cost of a new bicycle. Both needed some maintenance especially the Nishiki, as Wayne from Performance Bicycles put it the drive train was held together by grit, grease and dirt. The problem was where to get rid of them and who could find the people who would want to take the effort and clean them up.

Then a solution to the problem came up, why not the odd looking bike shop decorated by bicycle art located next where the Lochside and Galloping Goose Trail meet called Recyclistas. Situated close to the new Uptown Development near Douglas Street in Saanich, right near the beginning of the east side of the Switch Bridge at 25 Crease Ave. The community bike shop recycles and reconditions bikes plus offers bike repair lessons at a reasonable cost to the public totally geared for people who want to fix their own bikes.

It turns out that Recyclistas accepts bicycles in any condition plus any type of bicycle part. Recyclistas also has lessons available for those of you who would love to learn the terminology, cleaning and regular maintenance for your cycle.

The two bikes now have a new home and hopefully will find themselves in the future hands of someone who could really use a bicycle with thanks to a local business called Recyclistas.