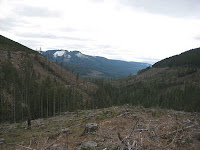 Yesterday we did an interesting motorcycle ride out of Shawnigan Lake on the Renfrew Road towards Koksilah River Provincial Park. After the park Renfrew Road eventually joins up with the Kapoor Main Line logging road and goes in a north-west direction following the Koksilah River.

While travelling on the muddy logging road we passed Sunny Daze Campground, a favourite place to stay in the area for 4x4 adventurers and events like Dual Sport BC's annual Orca Run.

Once we were past Sunny Daze it became very evident that this was an active logging road with lots of trucks passing us carrying full loads of timber. The Kapoor Main Line was well marked out with km signs and gated at certain points along the way. One posted sign at one gate stated that the gate was to be closed and locked at 4 pm. We figured we would have to turn back by at least 3 pm.

At one time the Renfrew Road (Kapoor M/L) went all the way to Port Renfrew. Today the road does not go through and stops at Williams Creek, where at one time was the site of the unique Bedspring Suspension Bridge. Unfortunately the bridge deck rotted out and was never replaced.

The goal was to make it as far as the old Bedspring Suspension Bridge crossing. But because of time constraints concerning the possible gate closures we ended up turning around at around 3:15 pm, about the 22 km marker. Although we never did make it to Williams Creek, it was an adventure and we have already started talking about coming back sometime in the future.
Posted by OurBC at 4:52 PM