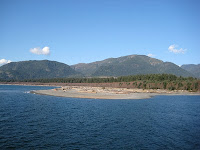 It proved to be just a perfect day today on southern Vancouver Island. With this in mind another opportunity for a motorcycle ride came up.

Starting off in Saanich to Hwy 1 then north to Duncan where gasoline was nearly 4 cents less per litre. After filling up at the Chevron headed inland on Highway 18 to Lake Cowichan. The conditions were excellent with surprising enough very little traffic. Although there was quite a few other motorcyclists who had the same idea.

From Lake Cowichan the trip took us to Mesachie Lake where the completely paved road to Port Renfrew starts. Highlights of this trip included Harris Creek Canyon, Lizard Lake, Renfrew Creek and some exploring on the Gordon River Main FSR past the Port Renfrew Marina.

Once at Port Renfrew the weather was crystal clear with very little wind. The ocean and beach area along the bay inside of Port San Juan was incredible.

Coming back to Victoria on the West Coast Highway 14 was fairly quick with little vehicle traffic. The only unfortunate thing was an accident scene Near China Beach with the remains of a motorcycle in the ditch and the RCMP watching over it.