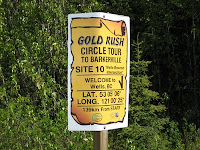 After the BC Big Trailie 6 motorcycle ride an opportunity came up to do the backroad from Barkerville to Likely via the Cunningham Pass FSR.

To do the road was definitely on the bucket list as it followed the paths of the prospectors in the late 1800’s along the historic Cariboo Gold Rush Trail. From Likely the fortune seekers went north along side Cariboo Lake, Ghost Lake located on the west side of Cariboo Mountains Provincial Park and past Cariboo River Provincial Park eventually to Barkerville. 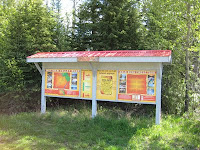 An earlier attempt was made in early October, 2010 to do the trip by going north from Likely on the 8400 Road. Unfortunately bridge construction was occurring between October 4th and the 8th on the 3100 Road at 4.5 km and 14 km and you could not get through.

This year the trip from Quesnel first started out with sunny weather but was then met with time delays with road paving for 18 km on Hwy 26 between Hwy 97 junction point and Cottonwood House. After that road conditions improved, the weather continued to be good and the mountains in the east looked clear, things looked fantastic. 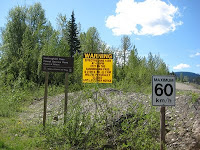 Inquiring about the conditions of the road at the Jack of Clubs Lake Visitor Centre by Wells the news was not good, apparently since June 10 the Barkerville-Likely Circle had been closed because of a slide that took place at the 26 km mark of the Cunningham Pass FSR, making the road impassable.

Sadly the story on the Barkerville-Likely Circle route goes from bad to worse especially after talking to the local park official at Bowron Lakes Provincial Park and a RCMP officer at a construction stoppage on Hwy 26 (who doubted the road would have been open due to low snow levels). It turns out that the forest companies don't really have any more merchantable timber left in the area and it doubtful that the road will fixed and opened again.

Please see comment below: It appears that the road could be open again. Hopefully we will investigate this in the summer of 2012 and fulfill a dream.